Western Europe’s largest lake boasts five islands. Some are privately-owned while others are open to the public. Each island has its own history. And we would like to tell you little bit about them. 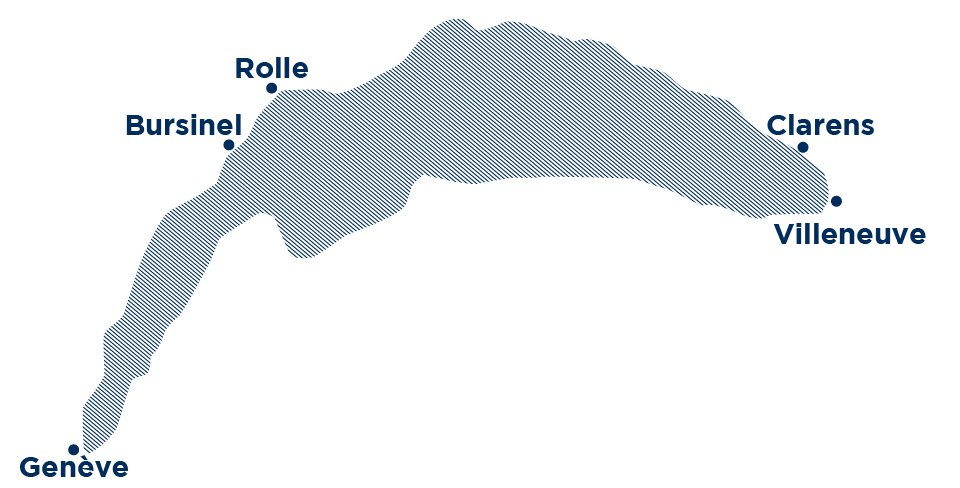 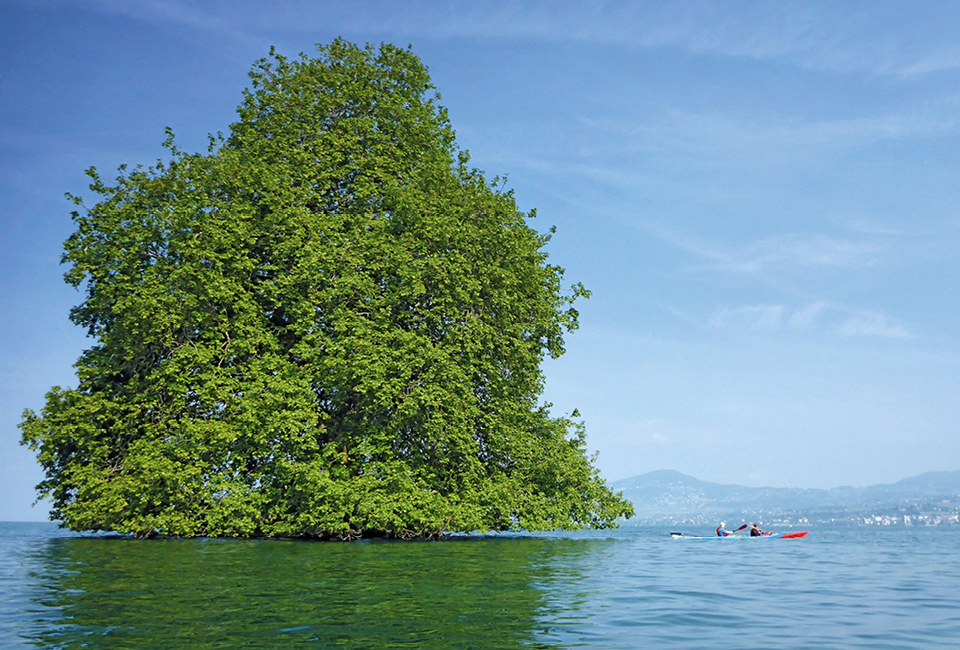 The smallest island in Lake Geneva lies offshore opposite Villeneuve and was the inspiration for a number of lines of the poem The Prisoner of Chillon by Lord Byron (1816). Growing out of the accumulation of sediment constantly deposited by the Rhone since the Ice Age, it was consolidated in the 18th century by means of riprapping. This island is thus almost natural. Several legends surround this little plot of land: it is said to have been raised in the mid-19th century by a young widow in memory of her lover who drowned in this precise spot. The story also goes that it was offered to Queen Victoria 150 years ago by our federal authorities, but that she returned it when asked to pay property tax. Other sources claim that the sovereign handed this heritage down to her descendants and that it still belongs to them. The true master of the island, however, is the impressive plane tree that is celebrating its 168th anniversary this year. Planted in 1851 along with two other plane trees, it is the only one to have stood the test of time and unquestionably marks the identity of the place. 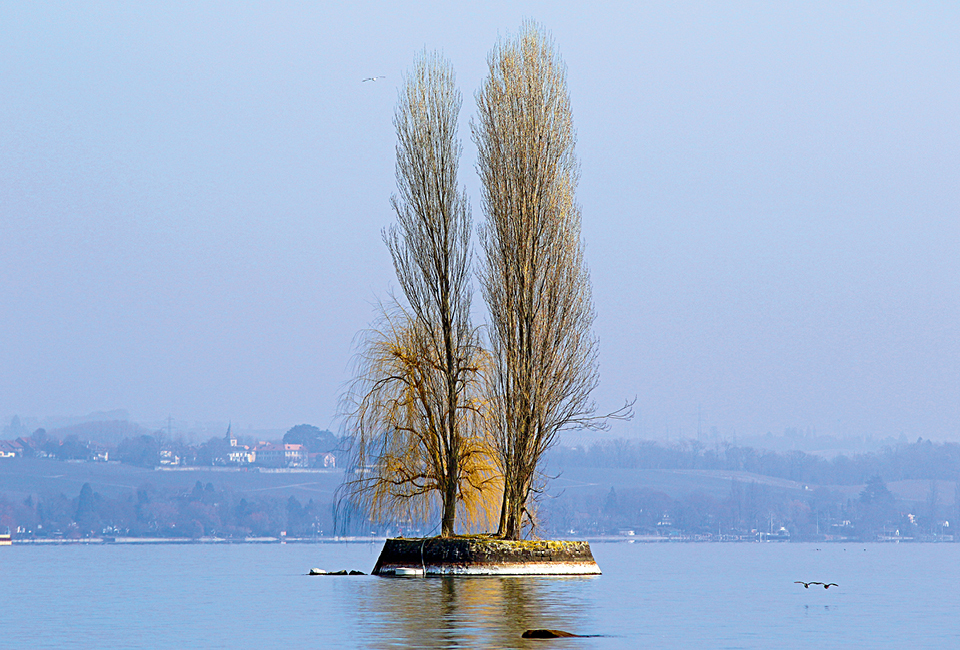 Located 70 metres from shore, it is said to be the oldest island in Lake Geneva. And yet there is very little, if any, information to be found about it. The archives are far more abundant with regard to the Domaine de Choisi estate which looks out at it from shore and accounts for 10% of the municipality of Bursinel. This park is said to have served, in part, as inspiration for Hergé’s The Calculus Affair while also being used as a cinema backdrop. Since 2015, the estate (home to a castle and mansion house) has belonged to private owners who are keen to remain anonymous. And for the anecdote, Sir Winston Churchill stayed at the Domaine de Choisi in 1946. The historical importance of the castle and its architectural value have led it to be listed in the cantonal heritage inventory and the Swiss inventory of cultural assets of national importance. 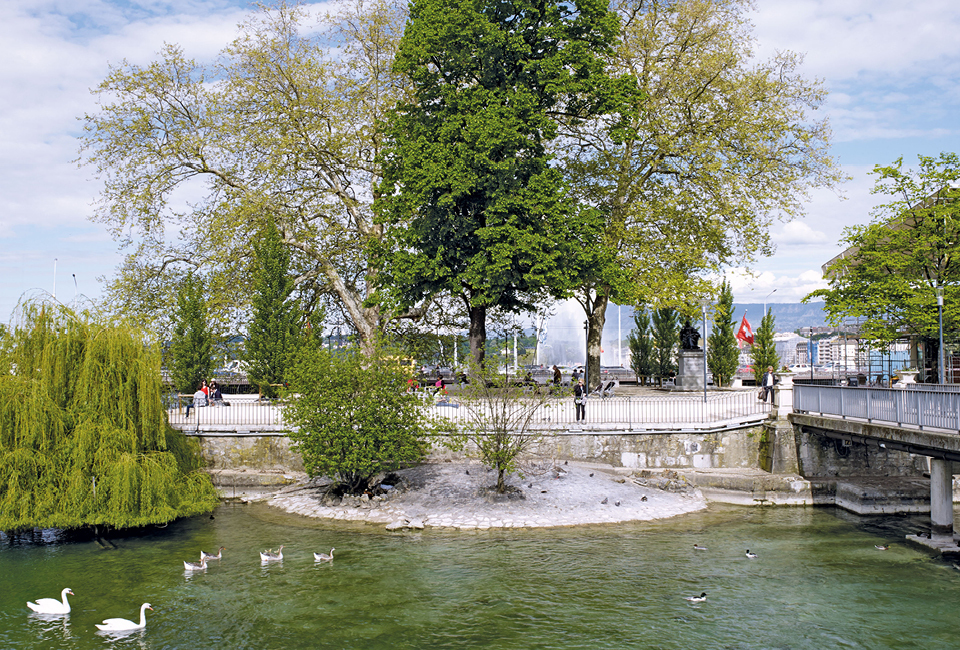 Located at the heart of the city, the île Rousseau is an area of greenery in the middle of the Rhône. A romantic setting today, it nevertheless had a somewhat turbulent past. A military site, this bastion belonging to the city’s defensive works was built in 1585-1588. Situated in the middle of the Rhône, it was a strategic point to oversee access to the harbour. From 1587, the reassigned site was used for the construction and repair of government boats. This was then replaced by a powder-beating plant and a quarantine warehouse for goods from regions affected by infectious diseases. In 1832, the island was connected to the Pont des Bergues bridge and transformed into a public promenade. Admirers of Jean-Jacques Rousseau decided to convert the island such as to recall the island in the little lake of Ermenonville so dear to the Genevan philosopher. They planted poplar trees from Italy and weeping willows. In 1835, a statue was erected in homage to this literary giant and the island was renamed in his honour. L’île Rousseau was restored and redeveloped for the three-hundredth anniversary of Rousseau’s birth in 2012. Now a public garden, it is the most frequented of the islands in Lake Geneva. 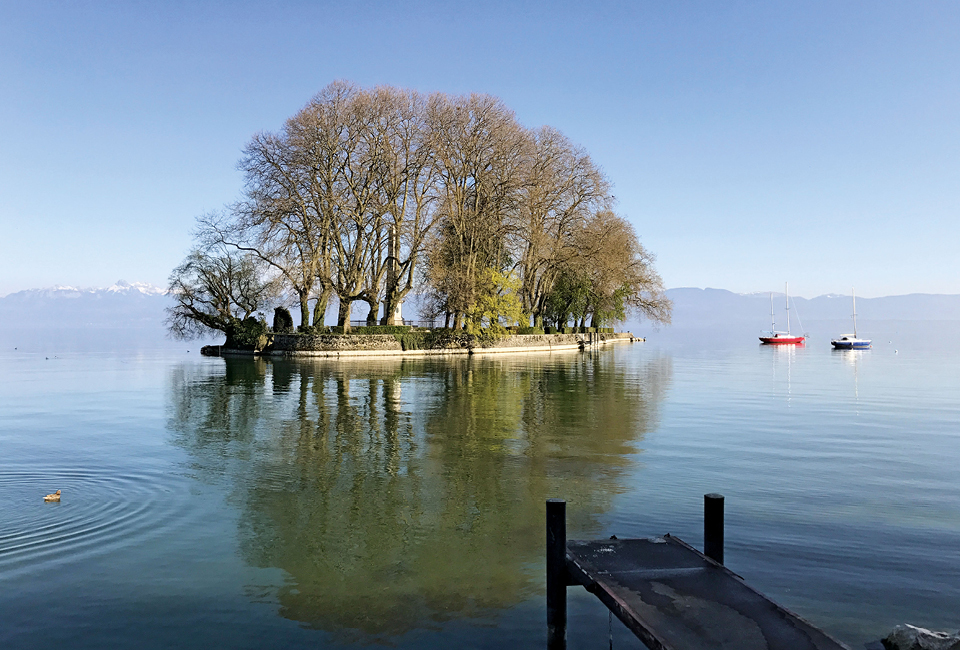 Location: Rolle, opposite the port

Around 1835, a group of local traders had the idea of erecting an island as a breakwater. The aim was to protect the port situated to the west where the lumber from the Jura was loaded onto boats for Geneva. The island was given its official name in 1838 in homage to Frédéric-César de La Harpe who died the same year. But who was this illustrious citizen? A lawyer and political figure in the canton of Vaud, he served as tutor to Czar Alexander I of Russia. For eleven years, he taught him the liberal principles in which he believed. On two occasions, this driving force behind the Vaud revolution played a decisive role in the history of our country: once in 1798 when he called for French intervention to “liberate” the people of Vaud from Bernese domination and a second time in 1813 when he convinced the conquerors of Napoleon to allow Switzerland to be the master of its own destiny. L’île de La Harpe is the largest island in Lake Geneva. 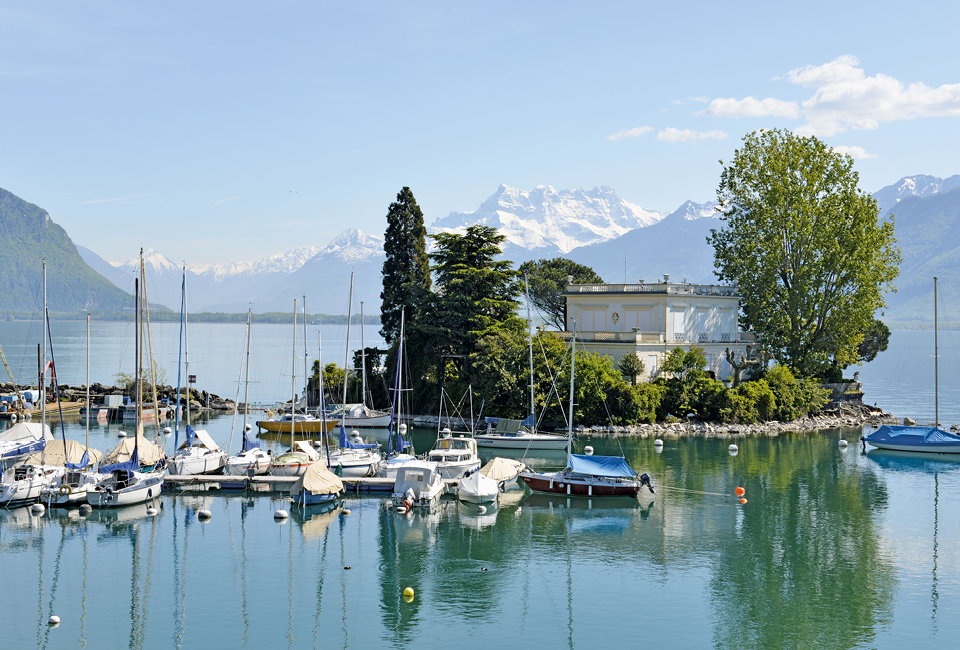 In 1880, nothing more than a heap of rocks poked out of the water. In about 1886, the Montreux-based engineer Joseph d’Allinges, tasked with building the Tonkin railway (Saint-Gingolph – Evian), emptied barge-loads of stones onto this pile of rocks. And so the island was born. It was recorded in the land register in 1889 under the name Salagnon, a reference to the barges loaded with salt which used to be subject to controls by the Clarens customs office. The island was purchased in 1900 by the French painter Théobald Chartran. Some steps and a little port were built, followed by a Florentine-style villa. Today, it is said to be one of the most photographed houses in the world! Théobald Chartran stayed here every summer until his death in 1907, and organised lavish evenings with illustrious guests (politicians, philanthropists, famous artists). The island then passed into the hands of a Russian count, a merchant from Zurich and Mary Shillito, an American. In 1947, it became the property of a Zurich-based businessman, Ernst Pflüger; his son, Ernest Bernhard Pflüger, is the current owner. The island and the villa are listed as cultural assets of national importance. And for the anecdote, the actress Simone Signoret filmed a sequence from Suzanne et son marin here in 1949, a film by the Swiss director Leopold Lindtberg.